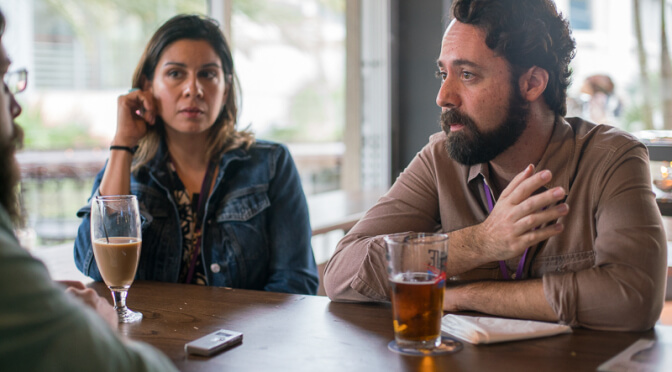 Glo, my wife and co-producer, and I had the pleasure of attending the Sarasota film festival this year in support of our film Oleander. One of the perks of this awesome festival is being able to pitch your film to the press and we were lucky to be featured on SRQ, Sarasota’s premiere culture magazine. Check out the original article at this link.

With a world premiere tomorrow at the Sarasota Film Festival, the short film Oleander explores the hardships of parenting and the dark side of human nature with a fictional recreation of the events leading to the 2014 death of Cooper Harris, left to die in a hot car at 22 months of age. Cooper’s father would later be charged with murder in a case going to trial this month. Written and directed by Pete Capo, Oleander recreates the decisions leading up to the tragedy in an effort to understand how it could have happened.

“It was definitely something challenging, not just for myself but the audience as well,” says Capo, recalling that even during the trial, when the evidence was mounting to the point of a jury conviction, there were still many who refused to believe it was possible. “It’s a tough thing to talk about,” agrees Gloria Capo, Pete’s wife and producer on Oleander. “You hear about it on the news, but once you watch it it’s a whole other thing.” Being new parents themselves, the research alone proved trying, delving into the mind of a parent capable of killing their child and trying to see how they could rationalize or steel themselves to the deed.

“It was definitely something challenging, not just for myself but the audience as well.”

“People are going to react in different ways,” says Capo. At private screenings, he’s already seen people in denial of what they see on the film, putting together clues and hints that were never intended in an attempt to create a happier ending to the true story. There remains a disbelief, he says, a disconnect at the notion that perhaps not everyone should or could be a parent, and how the child can pay the price. “Ideally,” he says, “there will be a conversation about how this stuff really happens.”

“I just want to enjoy the whole process,” says Capo. “We’re really proud to be here.”

Article written by Phil Lederer for SRQ Backlot on April 2, 2016. Photo by Wyatt Kostygan.
This text was reposted from the original article which can be found here.

Cell phones are like smoking back in the 50’s

Cell phones are like smoking back in the 50’s